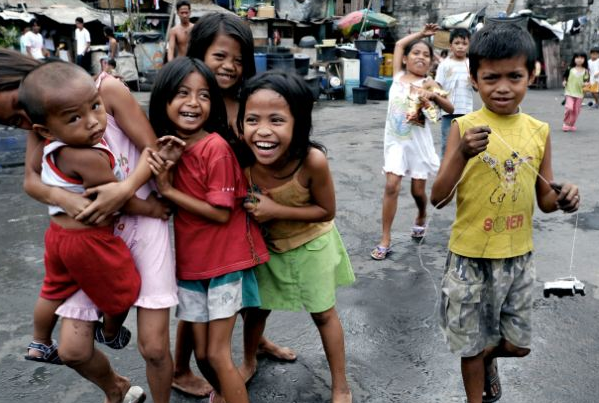 The best thing about growing up poor

Reading Time: 5 mins. (same time it takes to check out your crush’s status on facebook)

Even though our recent US economy is still a bit shaky, it doesn’t compare to my first-hand experience of Poverty growing up.  I grew up very poor while being raised by my grandparents in the Philippines. My mother worked on various odd jobs just to be able to put food in the table.  I remember a time when I use left-over rice from my lunch as (paste) during art class since having an “elmers glue” at that time was considered a luxury.  But if you ask me now if I ever felt that I had missed out or lack anything as a child… I can say, definitely NOT.  As a matter of fact, I can honestly even say that my childhood was one of the HAPPIEST moments of my entire life  (using rice for art class was fun as a kid).  My childhood was never about materialistic things or wishing to have more, I was content.  I never had a chance to play with action figures or having a video game system, but I cherished my “bottle caps” and “marbles”.

My childhood didn’t come from a place of lack but one of abundance and contentment.  It was filled with relationships and outdoor games  that easily overshadowed the need for cool toys and materialistic stuff.  The relationships that I had with my cousins, neighbors and playmates were moments in my life that I can never duplicate.  The awesome things that I did never cost a dime, but produced so much bliss and happiness.  Nature was my sanctuary as a child.  It was always a magical moment going into the forest playing “house” with friends and getting lost in the activity for hours on end.  There was a “lack” of worry and stress which made the world perfect in my innocent eyes.

Although there were times when food was scarce, yet I never felt hungry. Maybe once a week (after church) you get a take out treat from a favorite fast food restaurant.  I remember wishing I had a 6 pieces of chicken nuggets from McDonalds, instead of only having  4 pieces.  But instead of protesting and begging my parents for more, I tried to savor each nugget bite by bite.  You value friendships, everyone has that childhood friend that they will remember for the rest of your life. Your partner in crime, and mischief as you grow up.  As soon as the sun comes up in the morning, you both are ready to conquer the day with menacing innocent vitality.  Living poor was never a factor during those childhood years, but it has taught me plenty of valuable lessons.

Living a life of poverty growing up made me appreciate the art of “simplicity.” It enabled me to built up my “gratitude muscle” which is one of the important trait to reach pure “happiness.”  Simplicity led me to contentment of what I have NOW, without wanting MORE. Growing up and being raised poor made me value the simple things in life such as going for walks in the park and enjoying Nature (which I still do until now).  I also learned to appreciate the present moment and “what is” without thinking to much about what happened in the past or grandeur plans in the future.  Growing up poor  taught me a lesson in valuating each penny that I have in my pocket.  It showed me the importance of relationships with people instead of relationship to “things.”  If it wasn’t for those experiences, I wouldn’t be half the man that I am today.